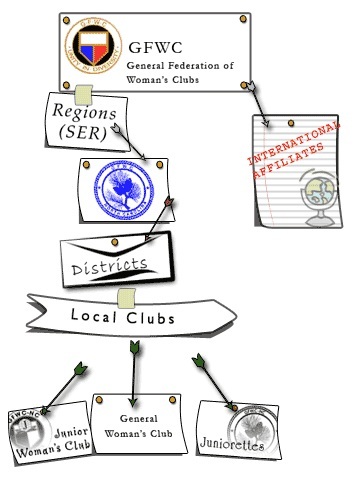 was one of the first organizations to understand the importance of networking.  Information is distributed to local clubs form the national level through a leadership chain.  In addition to the broad communication of program information and ideas sent directly to the local clubs form both the national and state federation levels there is a network setup which offers move in depth information and leadership training.

GFWC has a Board of Directors, which includes the President and Junior Director from each state. In addition to the GFWC Annual Convention, these leaders attend several meetings annually, which provide intensive training to assist them in meeting their leadership challenge. These meetings offer the opportunity to network with other ladies from across the country and to form far-reaching friendships.

In addition to the national gatherings, the country is subdivided into regions. Several states make-up each region and North Carolina is a member of the Southeast Region or SER . The other members of the SER are: District of Columbia, Kentucky, Maryland, Tennessee, Virginia and West Virginia. Each state in turn is composed of clubs in the various membership categories.

GFWC of North Carolina (GFWC-NC) operates under the leadership of a Board of Directors on which each club president, except Juniorettes, serves. In order to relay the program of work of GFWC-NC in a more direct and thorough manner to area clubs the state is subdivided into districts. There is a level of leadership that this framework adds which affords a closer connection for the local clubs. Districts reinforce and provide to the Federation program of work a closer link for the local clubs.

The program of work is presented through the various Community Service Programs by the leadership of those programs at each level of the Federation. This is networking … truly at its best, providing fellowship and offering life-long learning, leadership, and friendship opportunities.

The other example of this networking is the reporting element. Each club reports their accomplishments through the State to the national level. GFWC is able to then share these accumulated community service programs and hours with corporations and other organizations. Based on this data , GFWC then enlists sponsors and joins with other organizations to work toward common goals. This process makes the efforts of one club …even one member ripple like an ocean wave to have far reaching effects on the world. Each volunteer contribution then becomes instead of a mere drop of water in that ocean of humanity; rather part of the network of water that spans the globe.